Courses Cookbooks Membership Recipes My Story GET UPDATES Log In 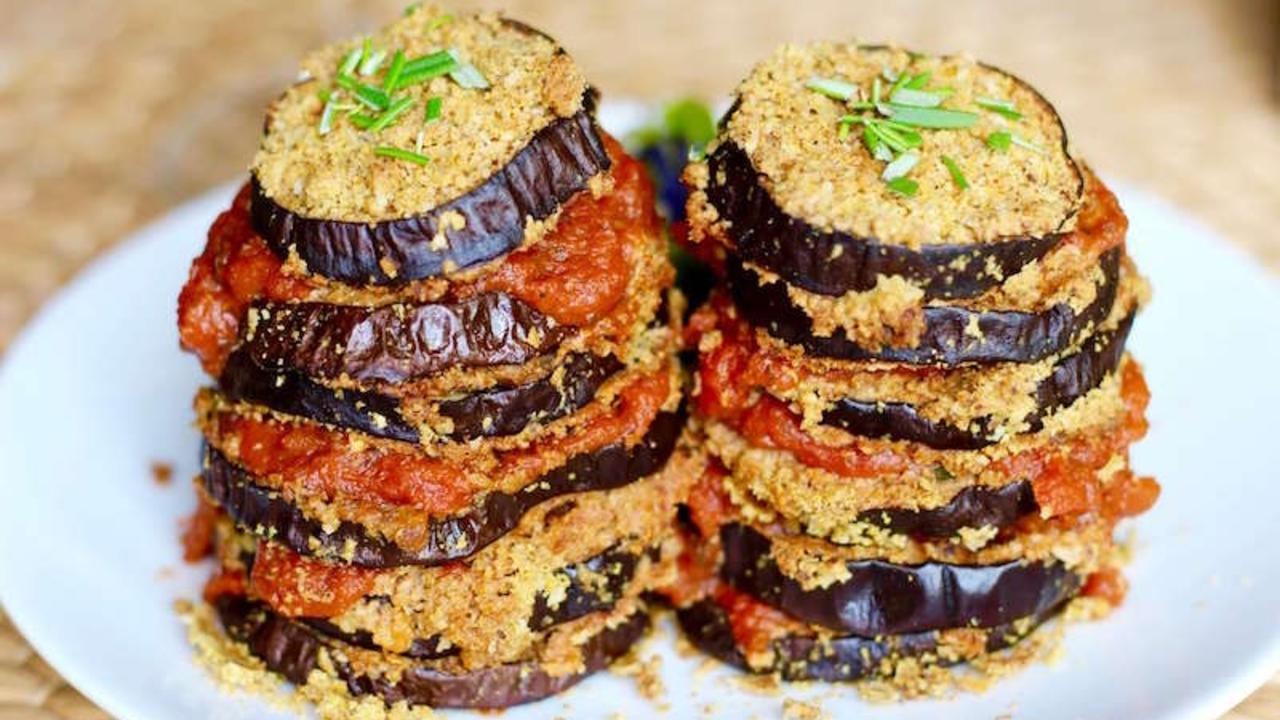 Eggplant parmesan may be the veggie alternative to Chicken Parmesan, but that doesn't make it a healthy and delicious whole-food, plant-based dish.

When roasted eggplant has a creamy savoriness to it that can't be ignored. Yet, I have a feeling it's actually pan-fried breading and the layers of cheese that make it such a vegetarian favorite!

The good news is it's very possible to turn this dish into one that's rich in nutrients and flavor!

The even better news is we've already done it for you once with our Eggplant Parma-Pecan! 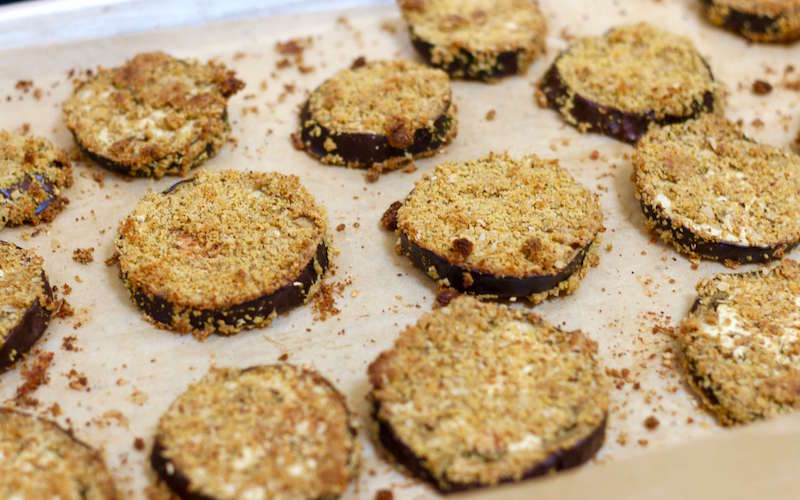 We're such a big fan of the breaded and roasted eggplant that we wanted to give this a second go!

It actually started because we wanted to see what it'd be like to use aquafaba, which is basically bean water, instead of egg to get the breading to stick. As you can see from the photos, it did an excellent job!

So now we have a second option to for a 100% plant-based, oil-free, salt-free and gluten-free breaded and baked eggplant!

You'll notice this recipe has a lightness that you've never enjoyed with a traditional eggplant parmesan! 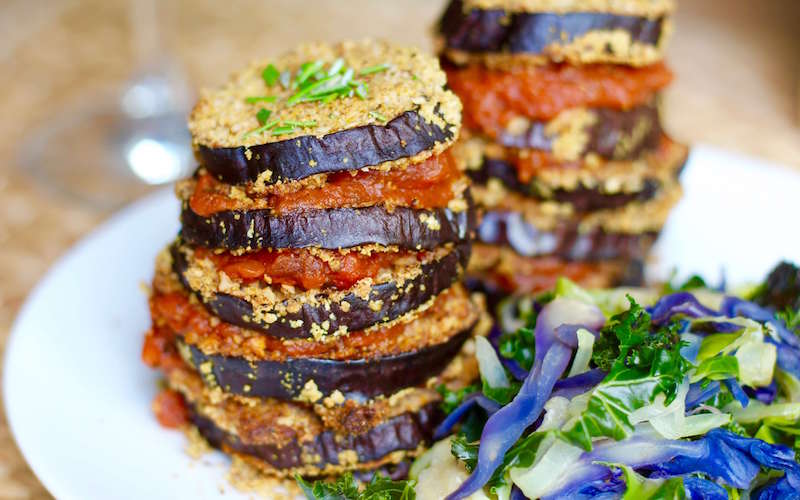 Without the all of the heavy oil and cheese, you can enjoy a deeper appreciation of the eggplant, breading, and marinara!

We thought every bite was bliss. What do your tastebuds say?

1. Preheat the oven to 425°F convection or 450°F standard. Line a baking sheet with parchment paper.

2. Combine the rolled oats, walnuts, nutritional yeast, garlic granules, and black pepper into a small food processor or blender. Briefly pulse a few times just until the mixture is a coarse flour, but stop before the mixture becomes paste-like. If some of the mixture is powder before all of its ground, transfer the powder to a bowl, and then finish grinding the rest. Another option is to this in a couple of batches to prevent over-processing.

3. Combine the finished breading mixture in a wide, shallow bowl.

4. Pour the aquafaba into a mixing bowl just large enough to dip the eggplant slices.

5. Set up the workstation so it’s easy to dip and bread the eggplant. For instance: have the eggplant slices on one side, the aquafaba in the middle, then the breading mixture, and on the end, the prepared baking sheet.

6. Fully dip one eggplant slice in the aquafaba, use your hands to cover the slice with the breading mixture on both sides, then place on the prepared baking sheet. Repeat with the remaining eggplant, putting them in a single layer on the baking sheet.

7. Roast the eggplant for 20 to 30 minutes, depending on your preferred level of crispiness.

8. While the eggplant cooks, either make a homemade marinara or warm up a marinara sauce.

9. Assemble the Eggplant Marinara Stacks just before serving so the coating is on the crisper side, and on individual plates, so it doesn’t have to be transferred from a serving dish. Consider how many stacks you’re going to make and how many slices you have to use.

10. For each stack, place one of the larger slices on the bottom, ladle a little of the marinara sauce over the top, add the next largest slice and more marina, and continue until all of the eggplant is used. Finish with sauce, a sprinkle of nutritional yeast, and a bit of fresh basil. Serve promptly.